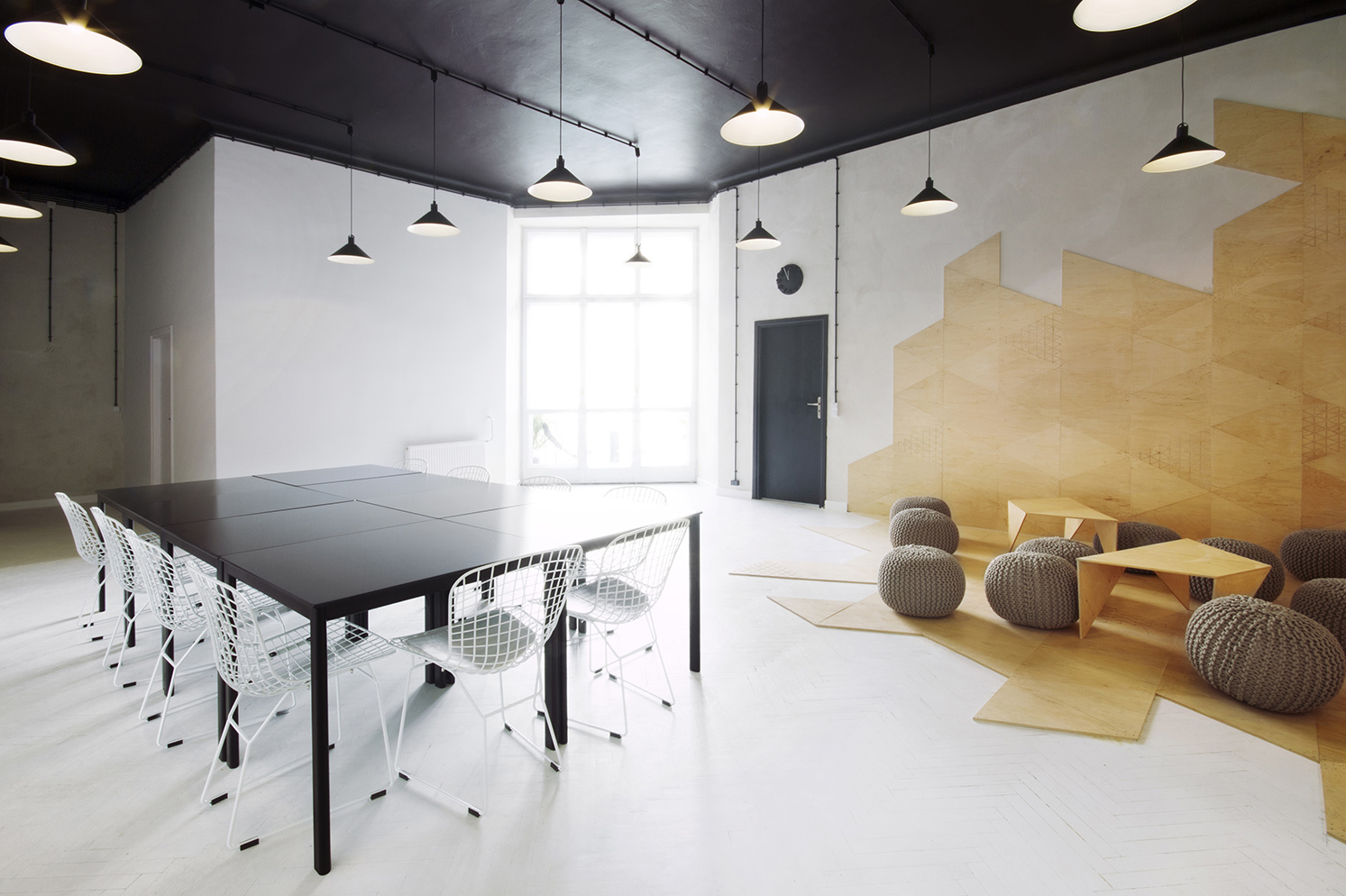 The object of design is a property in the centre of Warsaw, located on the Kredytowa street. This tenement house, funded by Mr. Goldstand in 1912-1916, was realized according to the project by Józef Napoleon Czerwiński and Wacław Heppen as a strongly decorated, seven-storey building. It survived the WWII in relatively good condition, but during a modernization in the 50’s its appearance was changed drastically, according to pseudo-modernistic fashion: the structure was reduced to four storeys by liquidation of its beautiful crowning, also the characteristic decoration of the facade was destroyed. For many years there had been service shops on the ground floor of the house. Lately, a big effort has been put into restoring those functions.

Rooms on the upper floor of the tenement house, despite a limited budget, were to be adopted for a representative space dedicated for two functions: an apartment and a conference room with a supporting social room. The investors strongly insisted on preserving the raw atmosphere of the interiors of this old tenant house. The renovation was conducted to achieve the style which in reference to revitalized factory buildings is called industrial, although in this case it is reinterpreted in a much warmer and cosier variation, so to reflect that the interior always served as a house, not a plant. The aspiration of the Investors was not only to create a place for living and organizing meetings, but one that could also house happenings, exhibitions and other artistic events.

The colours of the interiors have been chosen taking into consideration large, abstract and colourful paintings that were supposed to be introduced in the rooms. Therefore a monochromatic tonality of warm greys was chosen, creating a neutral background for the pictures. 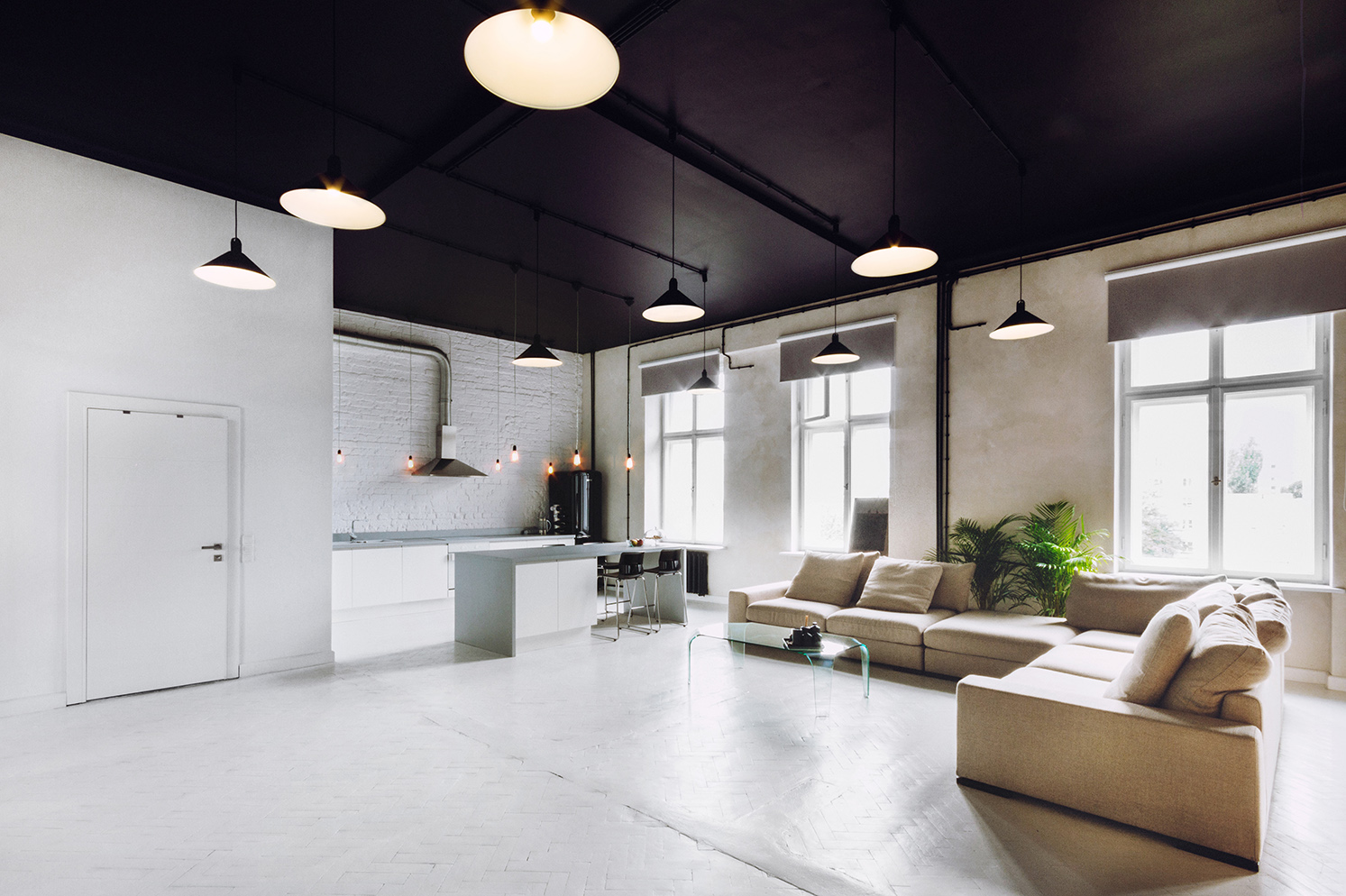 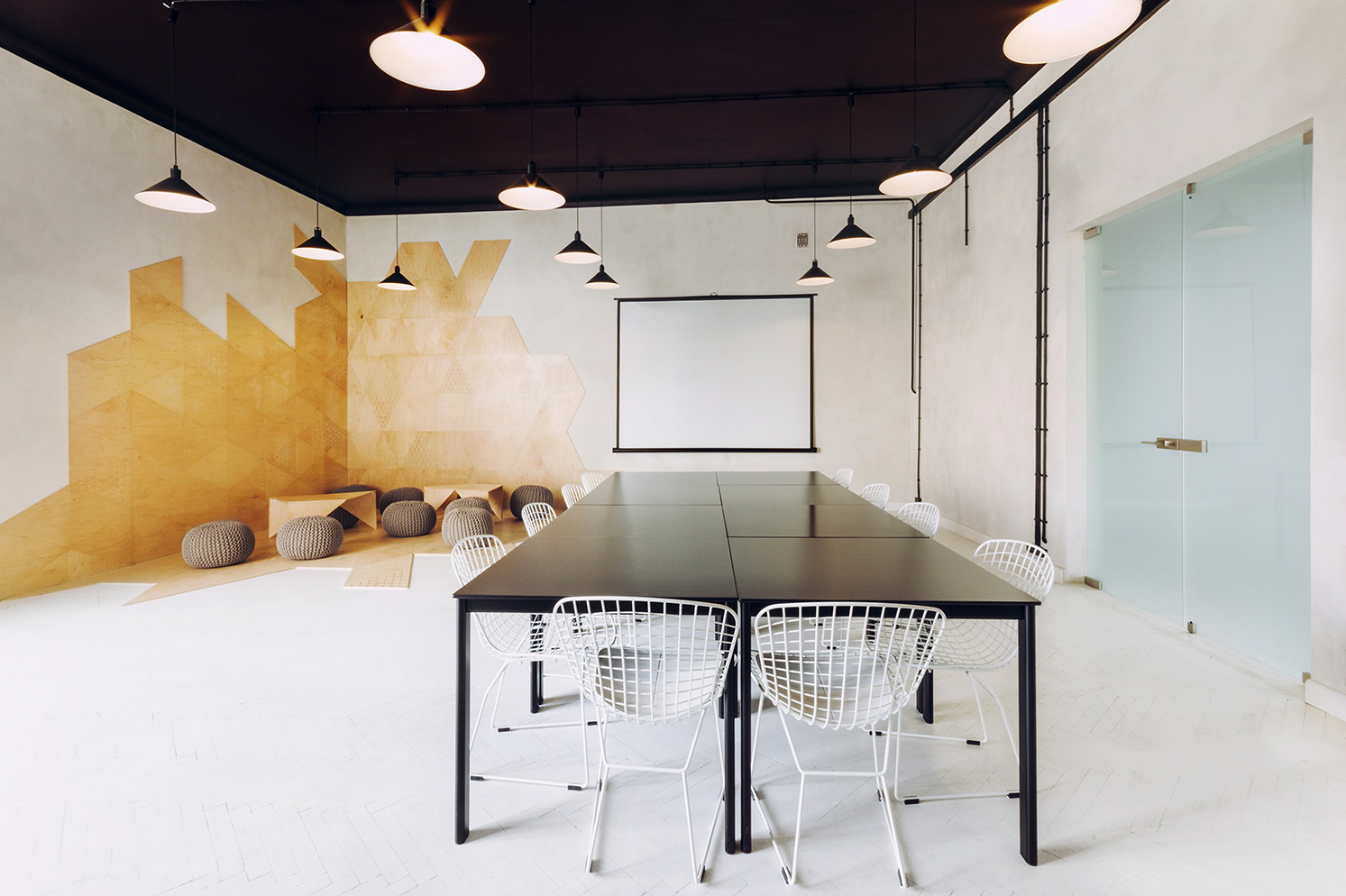 After removing all the unnecessary partition walls, the two interiors could be composed. The space here is defined by a pre-existing parquet that was painted white, a black ceiling and walls in the shade of light grey with expressive texture of coarse-grained plaster. In the opposite corners two pairs of cubical elements were added: one pair covered with birch plywood panels specially designed and produced using digital fabrication methods, and another pair with perfectly smooth plaster finish. Those interventions didn’t aim to mask the differences between the two interiors, but rather to obtain a harmony and equilibrium of the whole. It makes us feel, that when we cross the huge double door we pass through a magic mirror, recognising a reflection of the shapes seen before, despite the fact that they are projected in a non-literal manner, where every element is being reinterpreted.

Considering the extreme flexibility expected from the office part, its space was designed to be as manageable as possible. Traditional solid conference table has been substituted with modular system of smaller tables that can be easily adjusted to different needs, including individual workplaces.

Following the principle of equilibrating the two interiors, when in one corner a separate office was created, in the other the motive was reinterpreted in creation of an open zone for relax and more informal meetings, and distinguished from the rest of the space by triangular composition of CNC cut plywood panels, dedicated coffee tables and wool puffs.

This leisure zone is correlated with social zone housing a kitchen and gaming equipment that allow for active recreation after hours, like table tennis, foosball and darts. This part contains also a number of guest rooms (with shared bathrooms) designed in a monochromatic tonality.

Industrial atmosphere of the interior is emphasized by numerous details: electrical ducts in black integuments left visible, heating installations painted black or lamps picked from the abandoned part of the building and restored as the main artificial lighting source, as well as carbon bulbs. 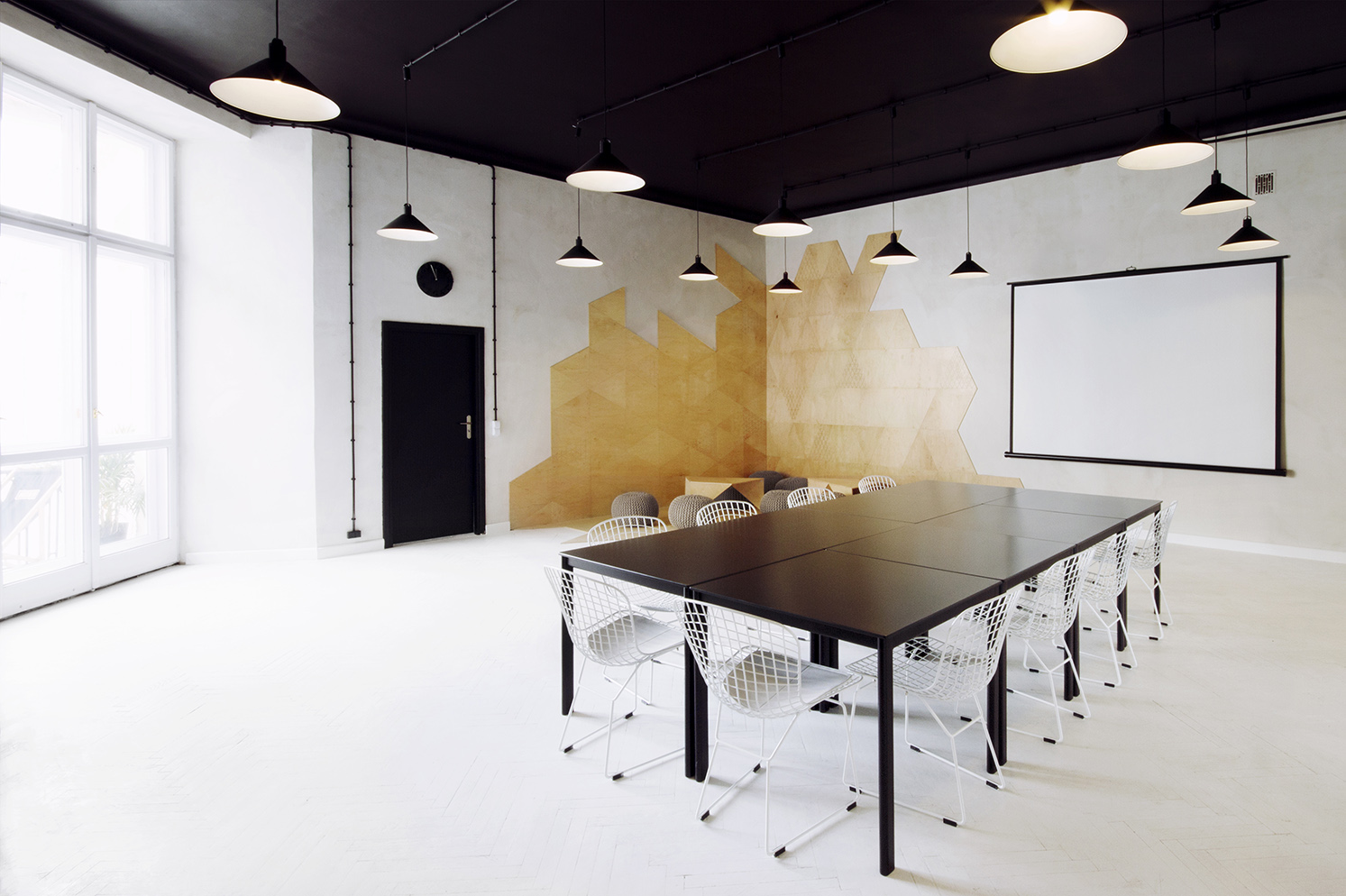 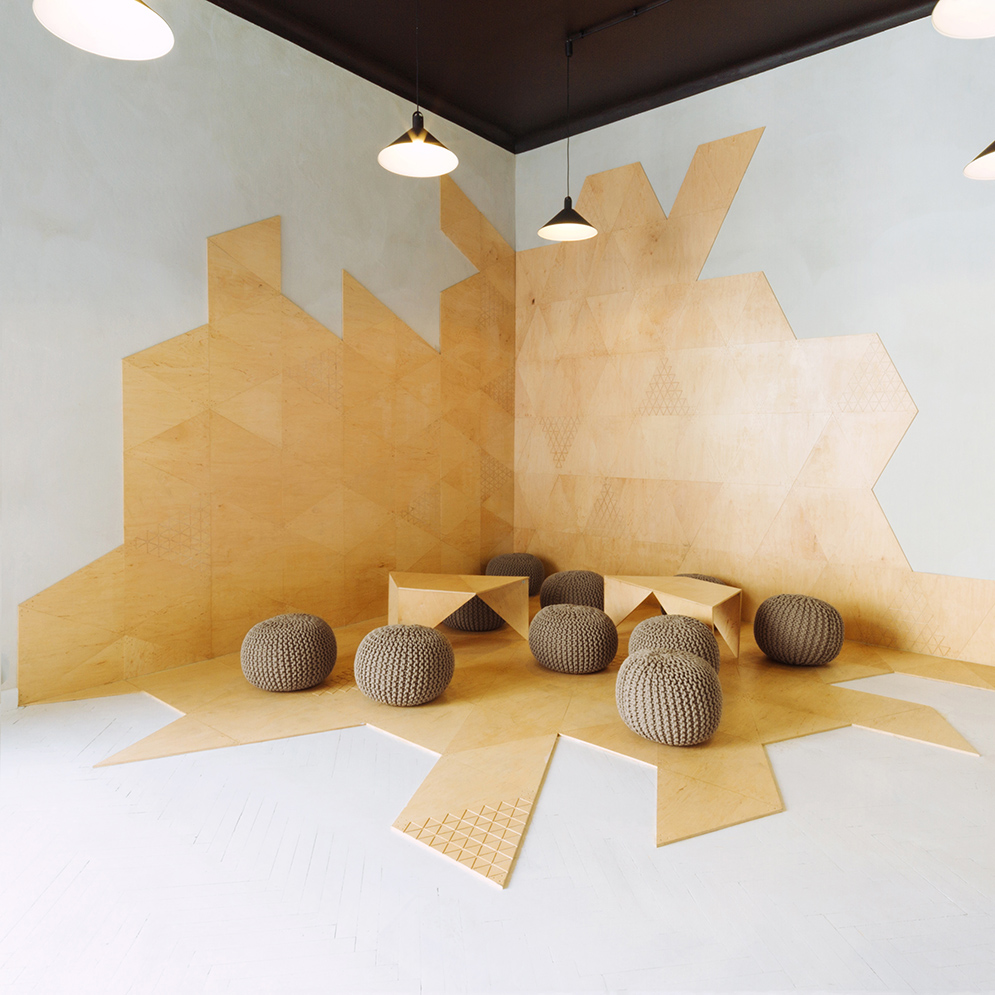 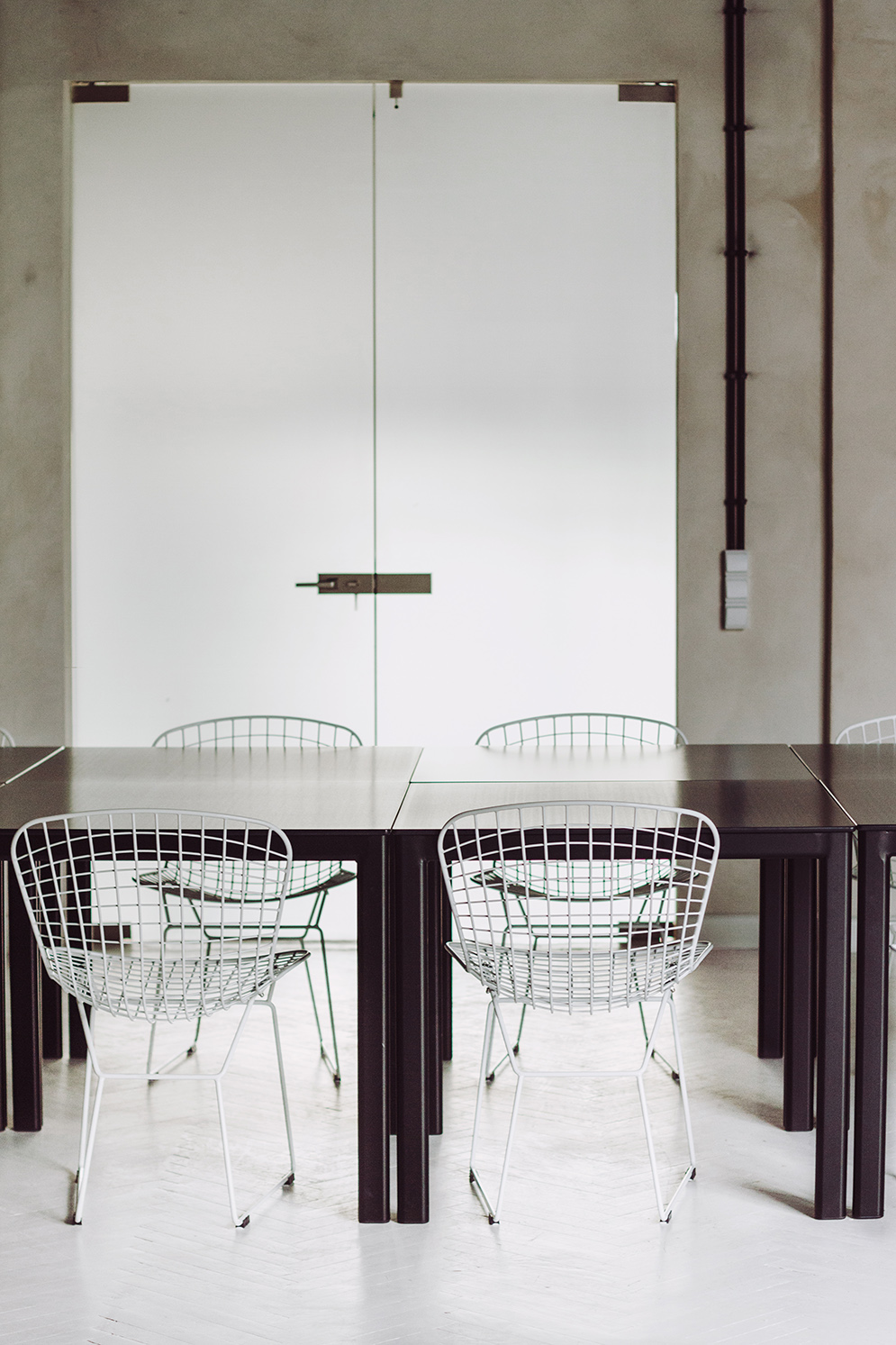 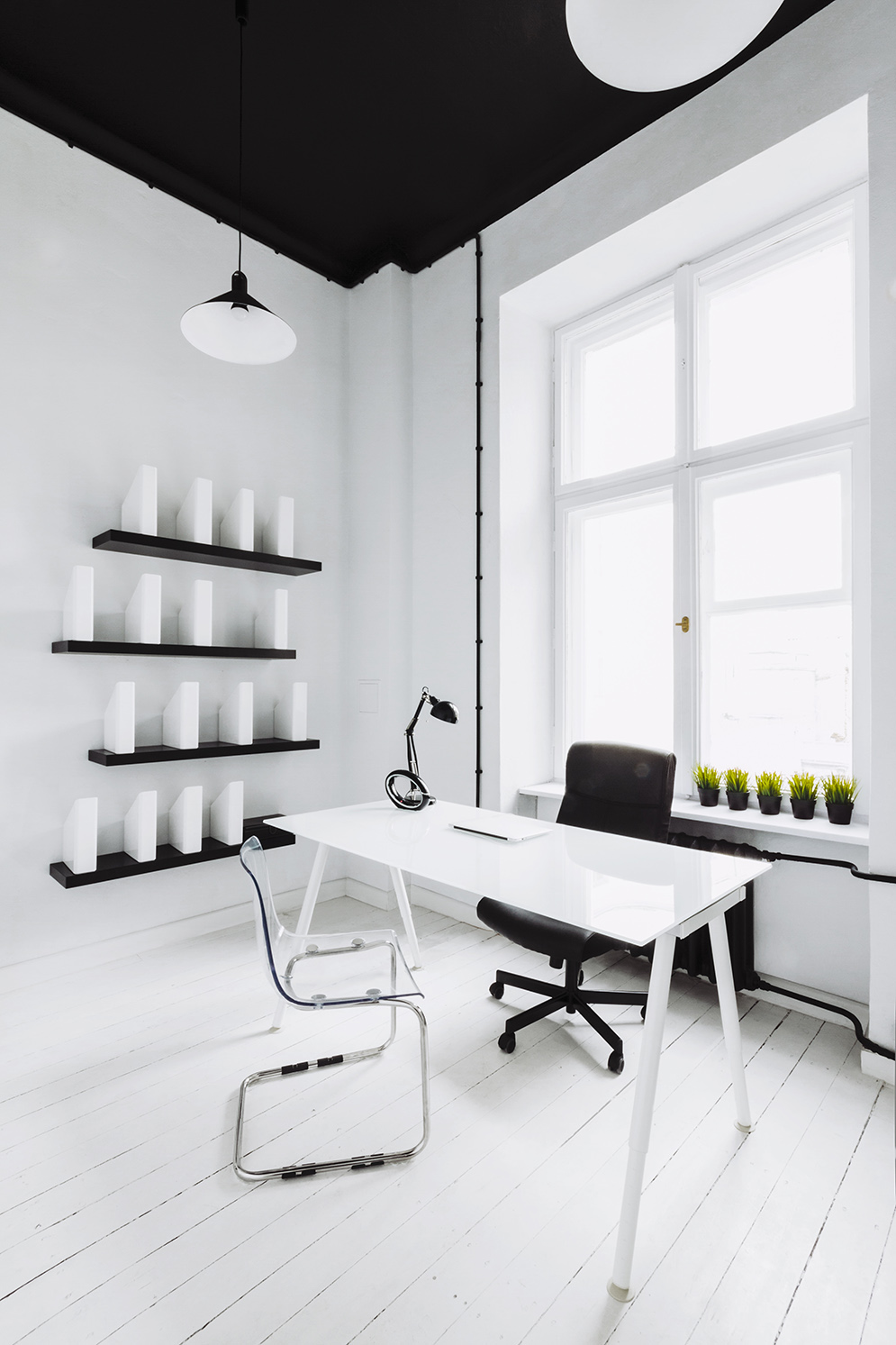 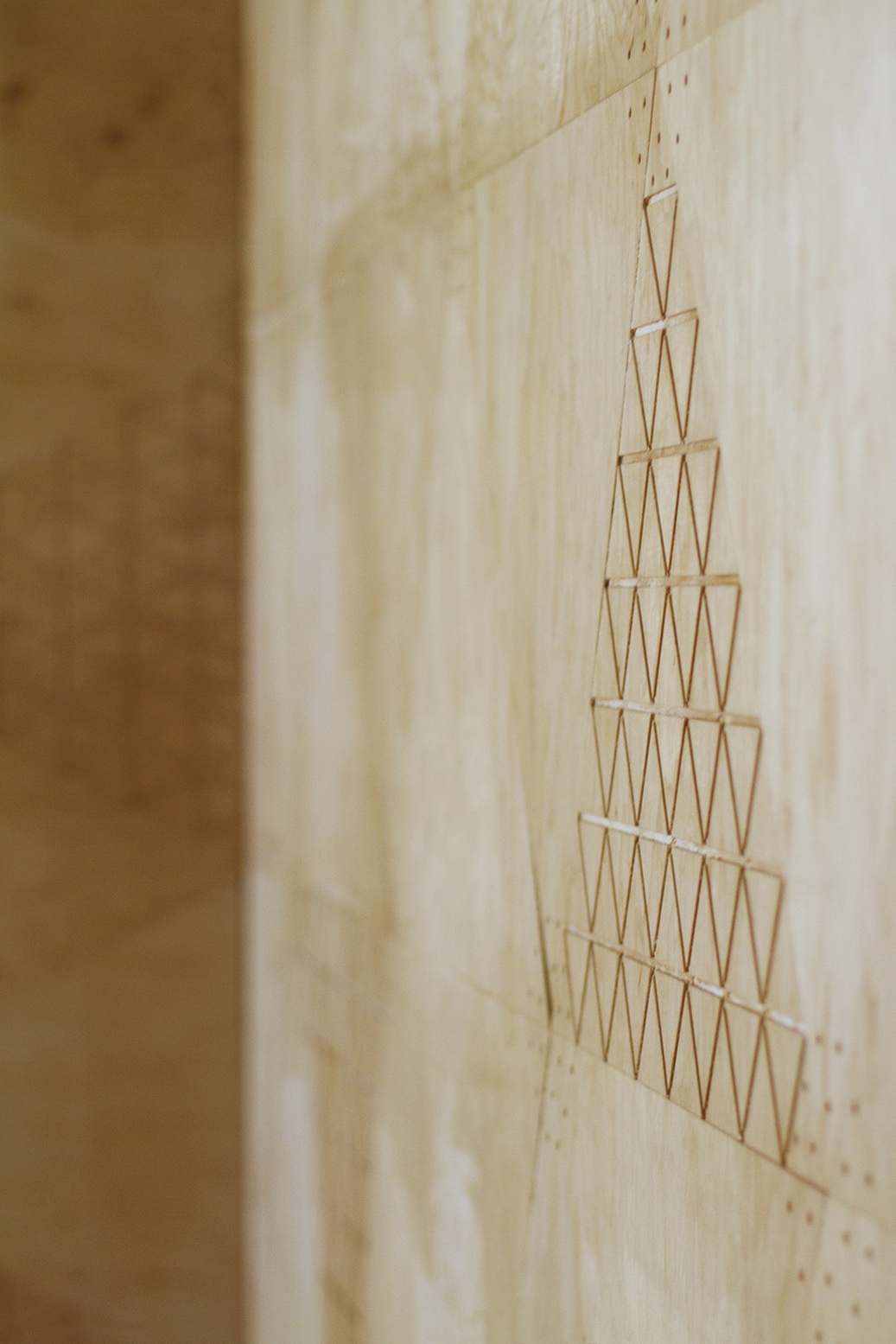 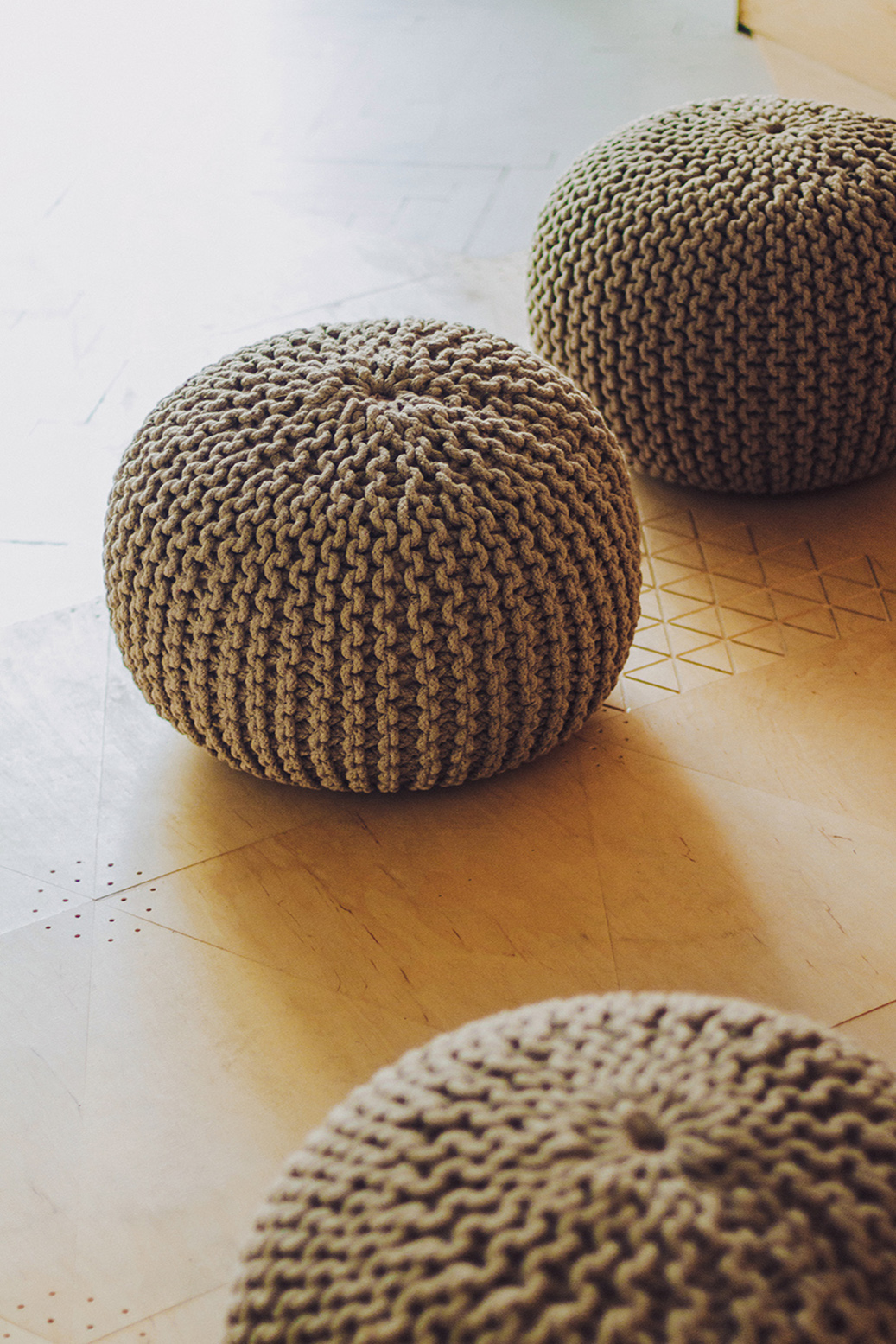 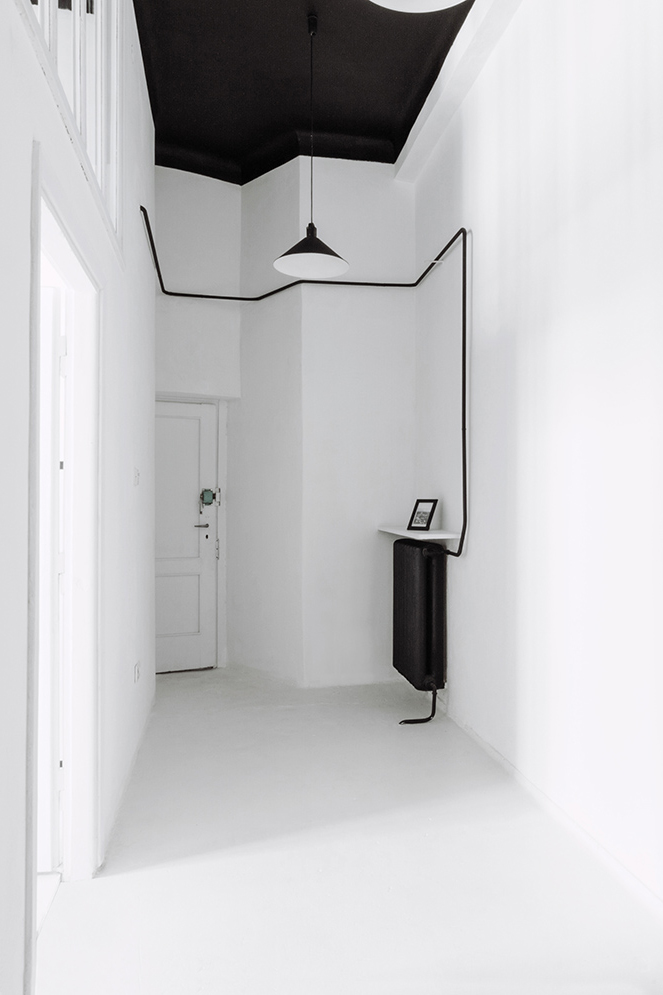 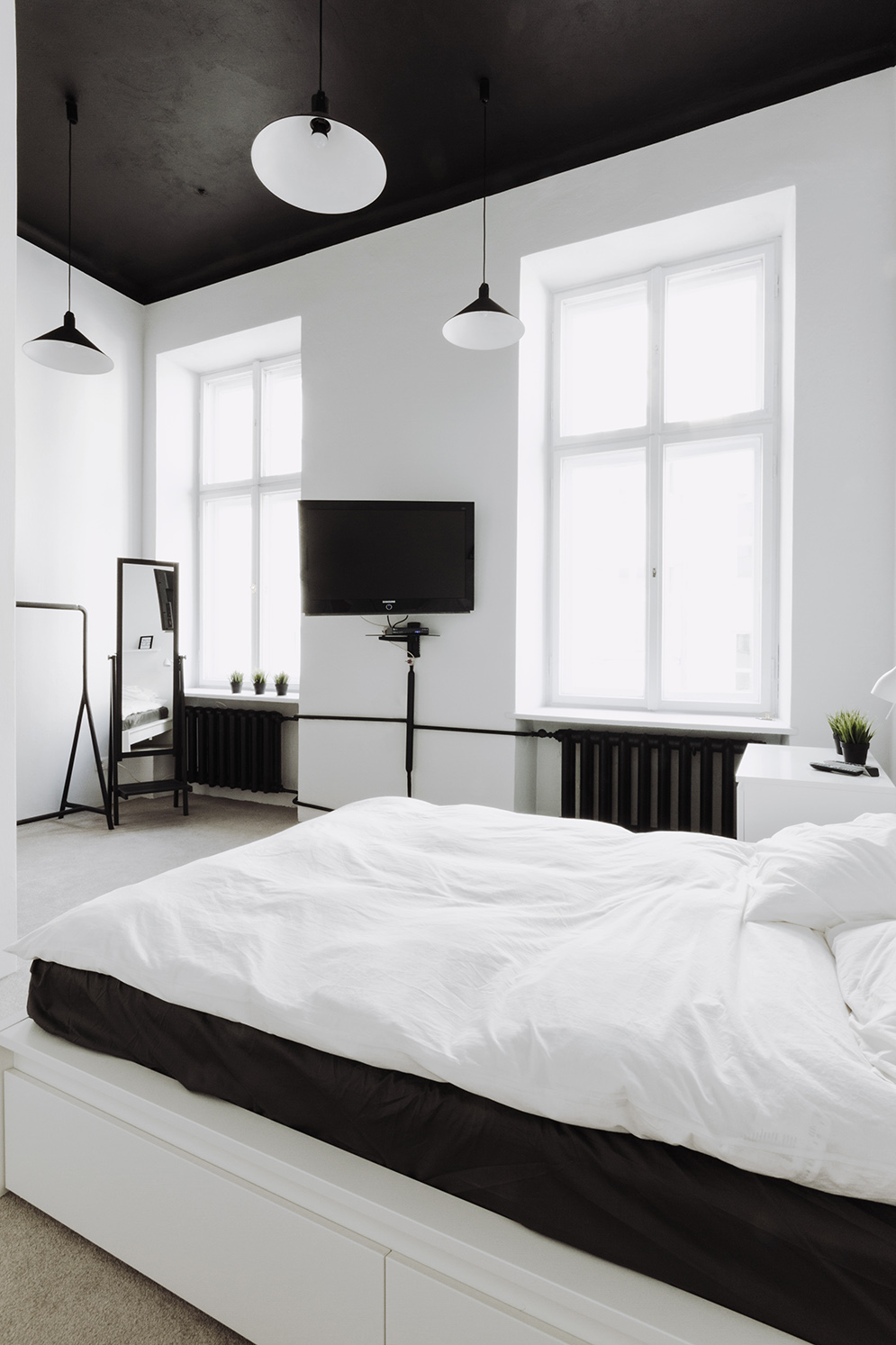 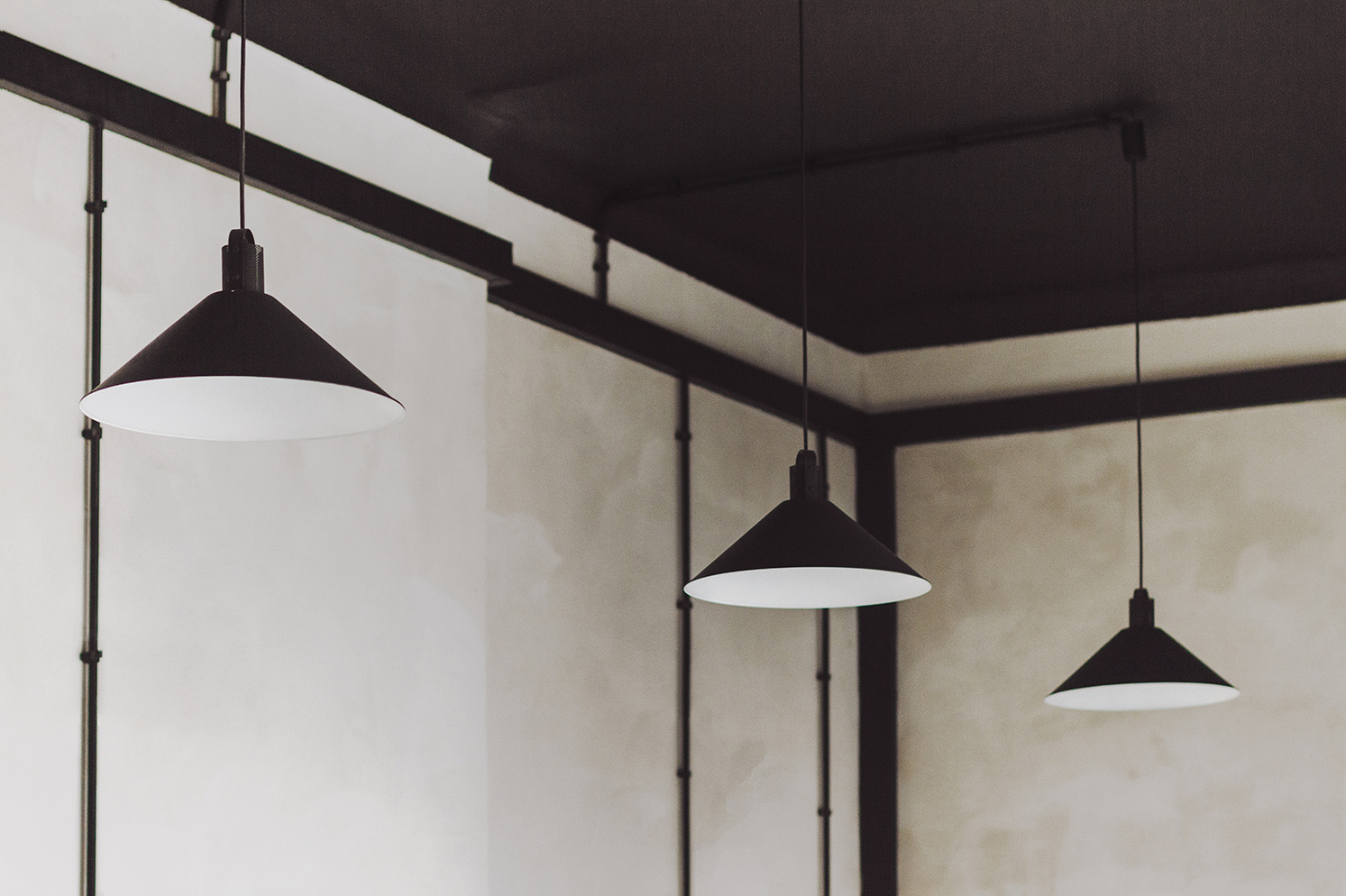 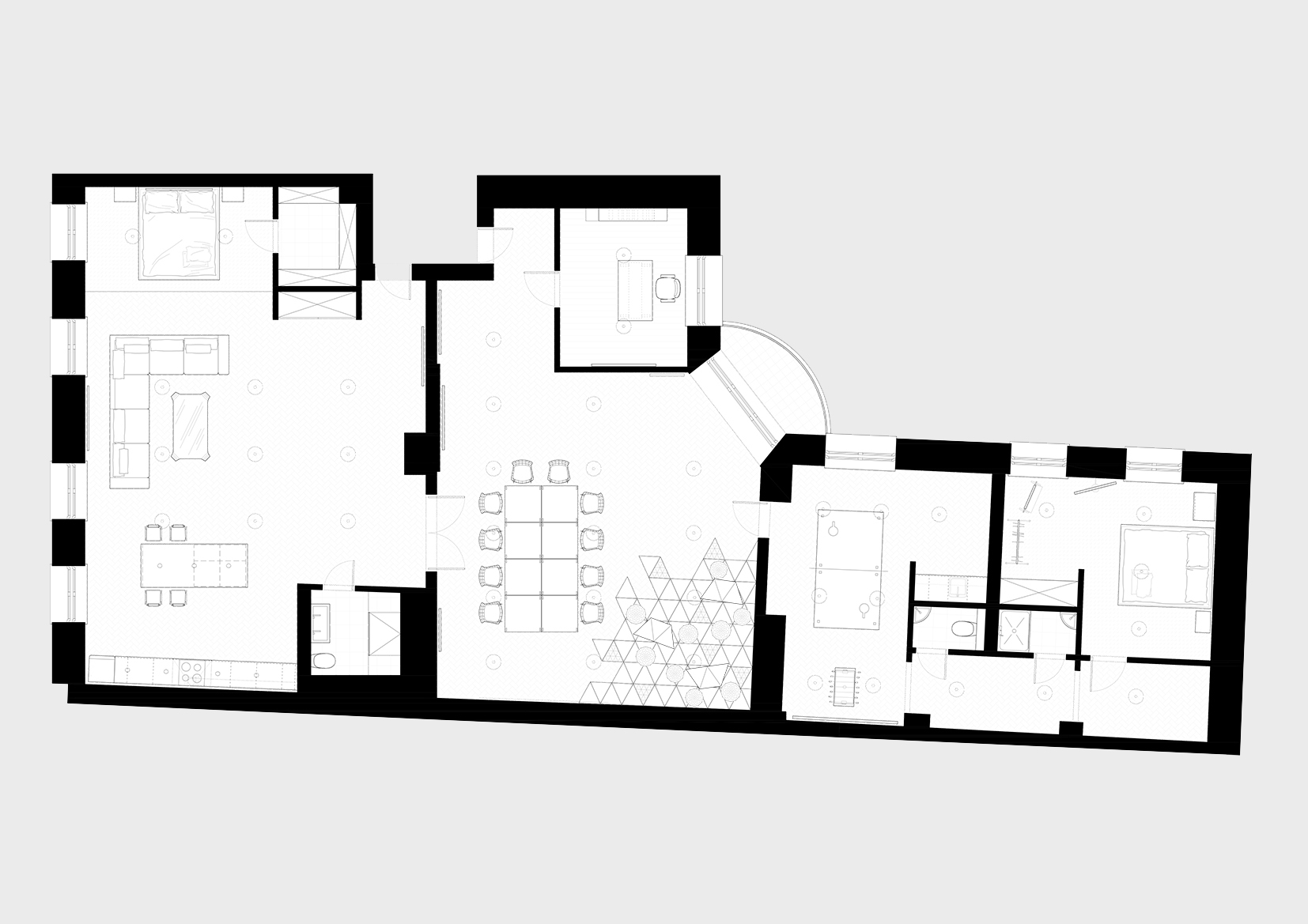 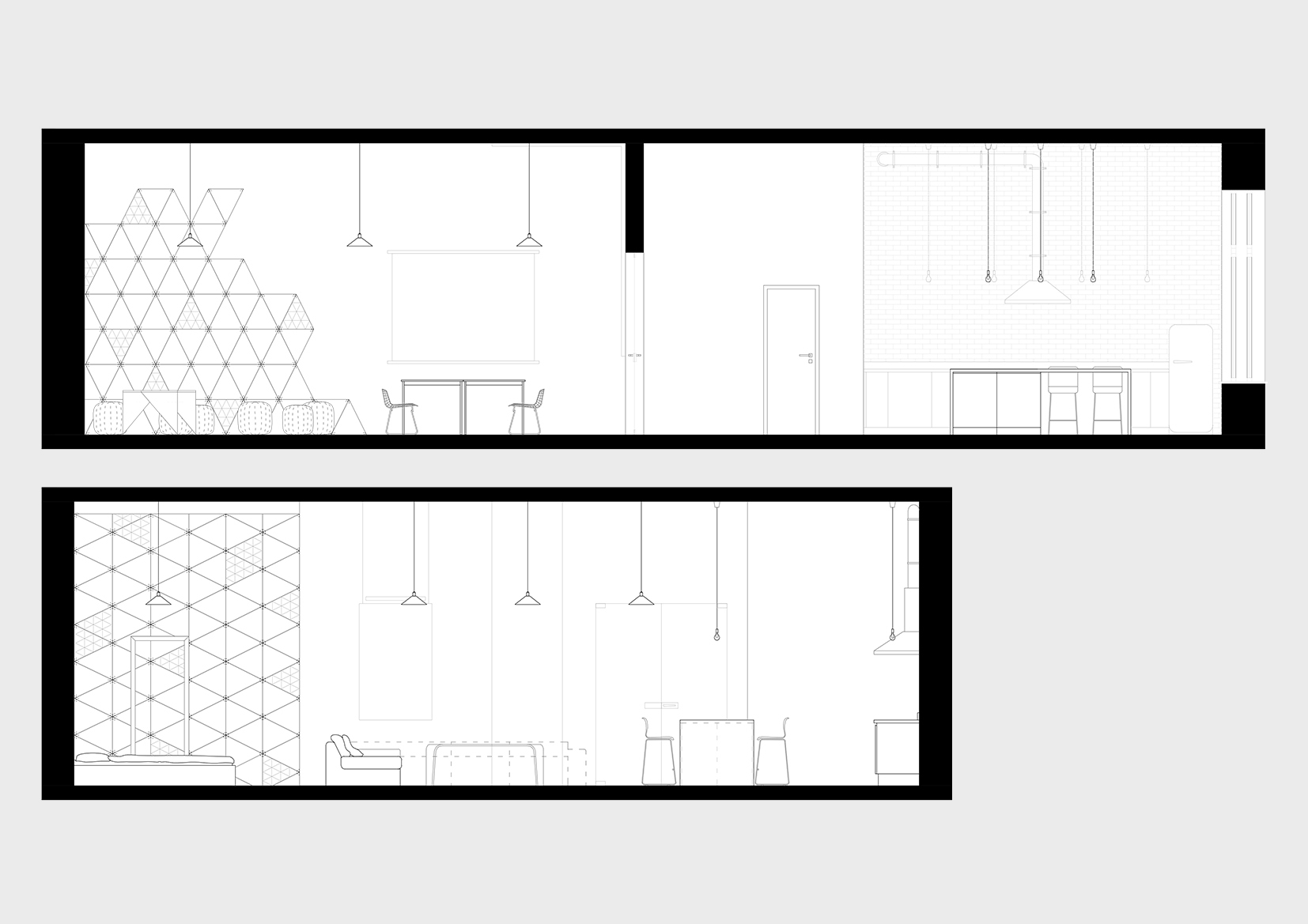